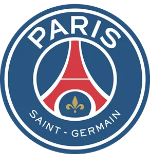 Paris Saint-Germain, Paris SG, or simply PSG, is a French professional football club based in Paris. Founded in 1970, the club has traditionally worn red and blue kits. PSG has played their home matches in the 47,929-capacity Parc des Princes in the 16th arrondissement of Paris since 1974.[1][2] The club plays in the highest tier of French football, Ligue 1.[3]

The Parisian club established itself as a major force in France, and one of the major forces of European football in the 2010s. PSG have won a total of 40 titles, 39 of them considered major trophies, making it the most successful French club in history by this measure.[3][4] Paris SG is also the only club to have never been relegated from Ligue 1,[5] the club with most consecutive seasons in the top-flight (they have played 45 seasons in Ligue 1 since 1974),[6] one of only two French clubs to have won a major European title,[7] the most popular football club in France,[8] and one of the most widely supported teams in the world.[9]

The State of Qatar, through its shareholding organization Qatar Sports Investments (QSI), has been the club's owner since 2011.[11] The takeover made Paris Saint-Germain the richest club in France and one of the wealthiest in the world.[12] As of the 2017–18 season, PSG have the sixth-highest revenue in the footballing world with an annual turnover of €542m according to Deloitte, and are the world's eleventh most valuable football club, worth €825m according to Forbes.[13][14]